This holiday focuses on gatherings of family and friends to pray for and remember friends and family members who have died to help support  their spiritual journey.


Dia de Los Muertos - It sounds so mysterious, Mexico's celebration for when dead relatives, both young and old, are allowed to return to the mortal world for two days to visit loved ones. Spirits coming down and walking among the living, sampling earthly treats and joining in the festival ... it sounds like a merry version of our Halloween holiday.
But instead of scary goblins and blood-curdling shrieks, the people in Mexico welcome the spirits of their families with the delicious smell of food in the air, tasty candies decorated like skulls, and lighted candles to guide them home again. Gravestones are decorated, and the whole family will gather in the graveyard to wait and pay respects to the deceased. 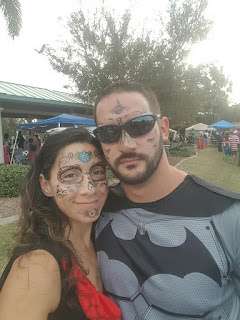 I'm unable to put up an altar with my Papa's picture with all the food and goodies he used to like. I know it's only been five years the pain is really still overwhelming it's still too soon. We as a family go visit a new family every year in our local graveyard to show our respects. We say a prayer and hope they are able to see their family on this day. 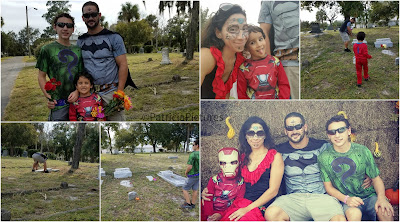 Posted by Life is only what you make it at 11/02/2016 No comments:
Email ThisBlogThis!Share to TwitterShare to FacebookShare to Pinterest
Labels: DIA DE LOS MUERTOS 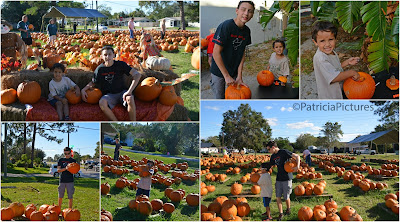 Sunday We went to the pumpkin patch a.k.a a church with pumpkins on pallets. That's what you get here in Florida. The Magic Dove shop held a pumpkin carving contest. 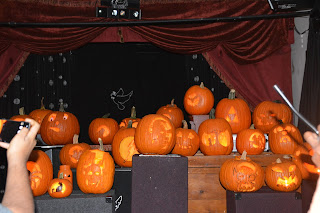 This pumpkin won was beautiful Kenji should be in a world craving contest or something. He did a horse picture on the back. Just insane I had no idea that kind of work could be done on a pumpkin.

Ever since Christopher was little he has no interest in sticking his hand in a pumpkin. He hasn't changed. He thinks it's Gross! Justin and I love doing it we love Halloween.

This past weekend was a busy one. Justin had a magic show Friday and Saturday. The Society of Young Magicians put on an amazing show. All the kids just were out of this world. 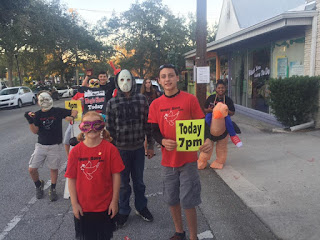 If you are ever in Cocoa Village stop by. I would watch out for the ghost Marshmellow he tends to steal cards from your trick. These kids worked really hard all month long which paid off with a full house. I was shocked at how many people came to see the show. I have to give it up to Doctor Dan his shop keeps these kids busy and out of trouble. Learning Magic is a hit.

Posted by Life is only what you make it at 10/26/2016 No comments:
Email ThisBlogThis!Share to TwitterShare to FacebookShare to Pinterest
Labels: Halloween, Magic and Pumpkins, Nana

Having a Birthday Party after a Hurricane

Last week we left on Wednesday to avoid the storm. We stayed in a little town named Ozark Alabama. The second town we stayed at was in Tory it's about two hours outside of Florida. It has the busiest traffic I have ever seen.  The good side I found a coffee shop I absolute love. I don't know what they put in the coffee but it's delicious!
When you order a drink they give you a chocolate covered expresso bean. It's because of them I have been drinking coffee all week. I haven't had coffee since May. I would move there just for coffee it's that good.  Once we were able to see our house had no damage it was clean up time. Clean up the branches from the yard plan Popsicle's 6th Birthday party which by the way isn't the best thing to do after a Hurricane. There was No School on Monday we handed out invites Tuesday then I dropped my phone so there was no way I could get calls or text.  I had so much anxiety about no one showing up. It turned out well we had twenty kids show up. 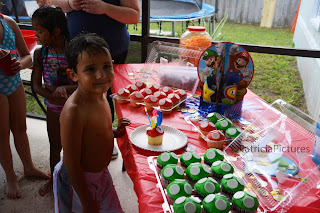 Christopher was having a blast! 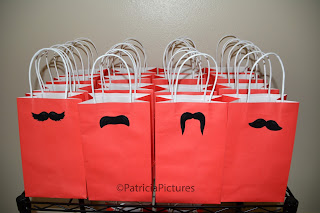 It was a Mario Party at the last minute. I swear  he changes his mind like his underwear. I was so happy and excited when I saw the cupcakes the baker now thinks I love him. It might have something to do with the fact that I said it. Publix did an awesome job on short notice. 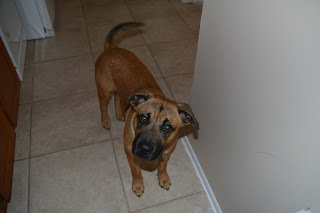 Thor wanted to go on the slide too so he had to stay in the kitchen. He looks sad! I gave him two bacon treats inside. It kept him busy for a minute. 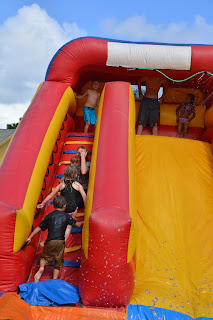 You never know when Life can change make it great every day you can. Sending lots of prayers for all that were affected by the storm.


Posted by Life is only what you make it at 10/16/2016 No comments:
Email ThisBlogThis!Share to TwitterShare to FacebookShare to Pinterest
Labels: Christopher, Florida, Hurricanes, loving life
Older Posts Home
Subscribe to: Posts (Atom)

Life is only what you make it

Other sites to find me at

Coffee for a Joe

Let them have a piece of home away from home.

We Can Be Heroes

One small act can make you a hero. Give now.